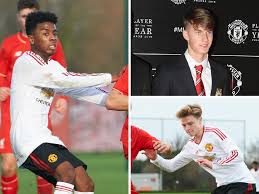 Manchester United management have great confidence in the next wave of young players coming through.

United manager Ole Gunnar Solskjaer’s commitment to youth has raised hopes for the next generation that they can flourish in the manner of Mason Greenwood and Brandon Williams, who have burst onto the scene this season.

And the feeling within the club is that the current wave of home-grown players who have forced their way into the first team, is just a taste of what’s to come.

U18 coach Neil Ryan said: “It’s a new generation and it’s our job to make sure the legacy of the Busby Babes and the Class of 92, of the likes of Norman Whiteside and Mark Hughes, the great players who came through in the 80s at this club, and up to Danny Welbeck, Johnny Evans and Marcus Rashford, Jesse Lingard and so on, a lot of the boys who are pushing on, they are not forgotten about.