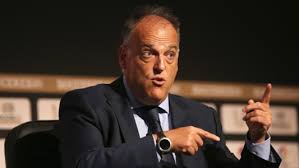 President of the Spanish League Javier Tebas,has hinted that Spanish football risks losing a whooping £880million should the coronavirus pandemic make it impossible to play out the season.

European leagues, in conjunction with UEFA, according to him were currently studying three possible scenarios of return starting on May 28, June 6, or June 28.

In the third scenario LaLiga would restart on June 28 and play through July with European competitions starting in August.

He said: ‘Including money from European competition we are talking about Spanish clubs losing approximately 1 billion euros if we don’t get back to playing [this season].

‘It would be £265m if we have to play all the games behind closed doors; and £133m playing with fans because of losses already incurred.’

Pushed on how competitions would be finalised if no more games could be played he added: ‘I only think about that in my nightmares. It’s a sterile debate right now. We will only start this debate if we know that we cannot restart the season. None of the big leagues should be thinking about this right now.’

Tebas said the restart would almost definitely be without spectators.

He said: ‘In terms fans in the stadiums, I think it will be very difficult to do that, especially in the first few games back. When we come back it will be behind closed doors and soon we will have definitive protocols for how that will happen.’

Mata urges footballers to do more to tackle coronavirus