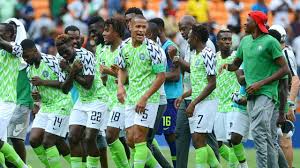 Kehinde who is eyeing a move back to Europe from his K League 1 club Incheon United noted that the Eagles have also achieved a lot in world football to receive the high rating, while noting that the current crop of players have the ability to take Nigeria football back to the zenith.

Going down memory lane, the former Ankaragücü of Turkey player said that the Eagles exploits at the USA 1994 World Cup where the team was adjudged the second most entertaining side behind Brazil

and the gold medal-winning feat at the 1996 Olympic Games in Atlanta were defining moments in the history of Nigerian football.

“It is nice to see all that the country has achieved in Africa and world football. We have won the heart of millions of fans with our scintillating brand of football and hopefully we will get back

to the zenith of world football with the present crop of players,” stated the stated the 6ft 4 1/2 in tall player, who scored 20 goals in 32 appearances for Israeli second division outfit Hapoel Afula in the 2014/15 season.

The bullish striker also commended the Super Eagles’ coach Gernot Rohr for his ability to fish out talents and coordinate the team, adding that the Eagles would soar under the Franco-German tactician. “Coach Rohr is good at his job and he has a lot of experience coaching different clubs and national teams in Africa

“He knows how to get the best out of his players. And his calm mien is needed to mould a strong side capable of battling for and winning laurels,” stated Kehinde, who scored 10 goals in 15 appearances for Denizlispor of Turkey in 2019.

He also called on the Nigeria Football Federation (NFF) to continue to support the Eagles and all other national teams so that the country can continue to excel in international competitions.