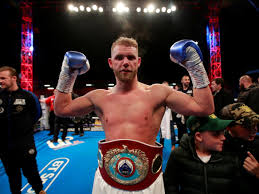 Billy Joe Saunders has been banned from all boxing after posting a controversial video appearing to show men how to hit women during the coronavirus lockdown.

The WBO Super Middleweight Champion was told by the British Boxing Board of Control he was suspended until a future hearing.

The 30-year-old was forced into making a grovelling apology after the vile clip surfaced, which has caused uproar across the UK.

The board said in a statement: “The British Boxing Board of Control have considered comments made by Billy Joe Saunders on social media.

“We have suspended his boxer’s licence, pending a hearing under the Board’s misconduct, at a time and venue to be confirmed as soon as possible.”

Saunders was in talks for a stunning clash with P4P king Canelo Alvarez, but his latest ban puts that fight in doubt.

During the video – that went viral from WhatsApp – Saunders demonstrated a straight right hand followed by a left hook on a punch bag.

He says: “I just wanted to make a little video for all you dads, husbands, if you’ve got girlfriends etc.

“Obviously this Covid-19 is getting very serious and we are isolated away.

“If your old woman is giving you mouth and you try to be patient, you try to be calm, cool, but after the sixth day you’re just about to explode.

I was appalled. It was so idiotic and it’s so frustrating.”

“All of a sudden she’s coming at you, spitting a bit of venom in your face, ready to say something, you may have left the dishes out, I don’t know what you’ve done but you’ve upset her.

“At this time she may flash and see white and think, ‘What’s happened?’, she’s in a state of a horror.

“She doesn’t know what’s going on and all of a sudden you dip down on that knee and you finish her off. That should do the trick.”

Outrage at the video was widespread and Saunders even revealed that certain vile hate mail had wished death upon his kids.

The boxer’s boss at Matchroom Eddie Hearn, who signed up the Brit last year, slammed the clip as “idiotic” while TV presenter Piers Morgan branded it “absolutely horrific.”

Hearn added: “I was appalled. It was so idiotic and it’s so frustrating. I know Billy well. He’s a really good kid with a really good heart, he does a lot for the community and charity but every now and again he does the most stupid thing.”

Matchroom were in the process of brokering a mega fight between Saunders and Mexican superstar Canelo Alvarez – most likely in 2021.

An original May date in Las Vegas had “a deal in place”, according to Hearn, but had to be put off amid the coronavirus outbreak.

This latest controversy could nonetheless provide Canelo with the perfect opportunity to drop Saunders from the mega £7million payday, his slick southpaw style proving a tough sell to his rival’s camp and also to casual fans.

BT Sport and Frank Warren were happy when he left them to link up with Sky Sports and Eddie Hearn last year, after his vile videos taunting vulnerable people from his luxury car left him a nightmare to promote to the mainstream public.

Saunders’ last fight was his first for Sky and came on the undercard of a YouTube celebrity fight in Los Angeles in which he was booed by the millennial crowd.

His last two UK bouts were a disappointing headline fight at his local football club Stevenage and a 2018 clash that was so low on the card BT Sport did not televise it.

In apologising for the video, Saunders asserted he “would never condone domestic violence”.

He vowed to donate £25,000 to a domestic abuse charity but they still took a dim view of his remarks.

“What sort of message does this video send to survivors of domestic abuse? That their experiences are not valid?”

It is not even the first time Saunders has courted controversy during the pandemic, having had trainer Ben Davison and stable-mate Josh Taylor kicked off a plane after he called Delta Airlines with a coronavirus warning – later insisting it was not a prank.